Note: This is a cross-post from Daniel Lunchick-Seymour’s original post on the Evans School Policy Analysis & Research Group (EPAR) blog. The original can be found here.

Individual countries and large international organizations provide aid to low- and middle-income countries for a host of reasons, including to encourage economic growth, to support regional political stability, to expand market access and humanitarian purposes. For economic development aid, donors generally intend for the aid flows to recipient countries to decrease over time and for those countries to move toward greater economic self-sufficiency.

But is the concept of “self-sufficiency” defined? Recent research by the Evans School Policy Analysis & Research Group (EPAR) tackles this question by reviewing both the academic and grey literature on aid and donor aid policy documents. 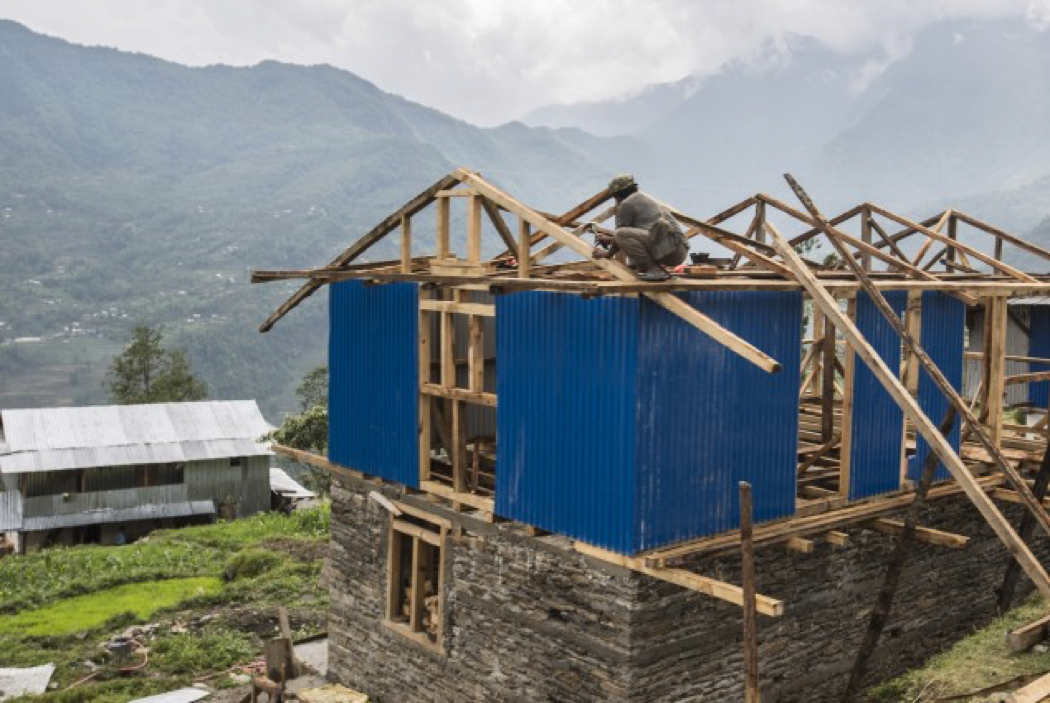 Within the academic and grey literature on aid the specific term “self-sufficiency” is rare and inconsistently defined. Some studies discuss the concept of “self-reliance,” while others focus on antonymous terms such as “aid dependency.” Much of the literature evaluates self-sufficiency in terms of finance; for example, a country that could fund its own development through private capital markets or taxation, could be considered more self-sufficient. Other familiar economic indicators mentioned in the literature to assess self-sufficiency include measures of economic performance (such as GNI per capita), domestic and foreign investment, and trade.

Some studies also discuss self-sufficiency in terms of a country’s institutional characteristics, including the quality of national institutions such as governance, bureaucracy, and rule of law. Additional institutional characteristics identified in the literature are “ownership” – the extent to which a recipient country exerts influence over its development priorities – and “absorptive capacity” – the ability of recipient countries to manage additional aid inflows. Finally, the literature on aid refers to qualities of recipient countries that could imply greater vulnerability and therefore greater difficulty achieving self-sufficiency, including a small population and political instability.

In addition to the academic literature on aid, we reviewed aid policies from large multilateral aid organizations, such as the World Bank’s International Development Association (IDA) and International Bank for Reconstruction and Development (IBRD), the International Monetary Fund (IMF), the GAVI Vaccine Alliance, and the United Nations Children’s Fund (UNICEF), and bilateral aid organizations like the UK’s Department for International Development (DFID). These donors have various policies for determining which countries are candidates to receive aid and the conditions under which aid should be reduced or ceased. Aid eligibility policies (including rules surrounding graduation from aid eligibility and exceptions to such rules) and aid allocation policies (determining allocations among eligible countries) reflect donors’ perspectives on the self-sufficiency of aid recipient countries, by specifying the criteria used to decide whether a country has need of aid or whether it can continue to develop without or with less aid. An example of an aid allocation policy is the IDA’s performance-based allocation (PBA) system, which evaluates countries’ needs based on institutional strength, portfolio performance, GNI per capita, and population.

Though the primary metrics used in eligibility and allocation policies (including graduation policies) all tend to focus on a small set of economic performance indicators (most commonly GNI per capita), a variety of other criteria, including access to non-aid finance, overall institutional performance, and vulnerability to shocks or special circumstances are also included in policy documents. Table 1 below lists which indicators we found mentioned in donor policy documents and which we found mentioned in the academic and grey literature. 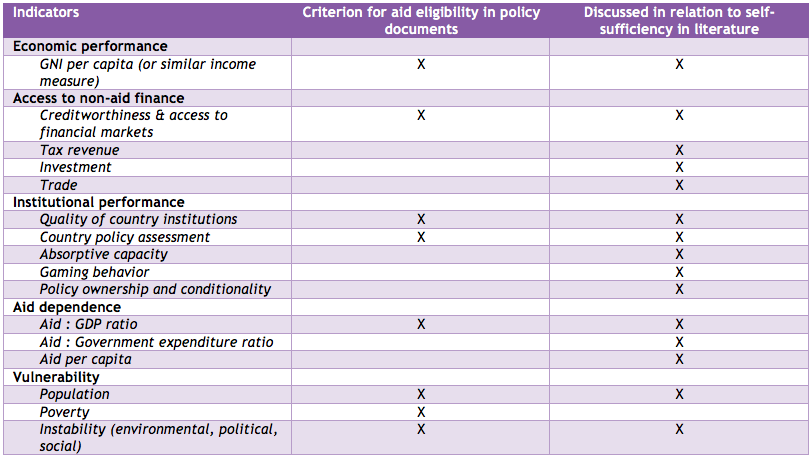 Though country classification by income (such as GNI) has traditionally been used to guide international decision-making, there is an increasing concern that donor aid policies based on income overlook important dimensions of development, such as poverty, inequality, and health needs. Some authors critique the notion of self-sufficiency thresholds (such as particular levels of GNI per capita), arguing that countries fall on a continuum of increasing or decreasing dependency on aid, which thresholds obscure. Other critics argue that arbitrary income thresholds may have very little bearing on cross-country differences in access to and capacity to mobilize resources.

A potential implication of inaccurately assessing a country’s self-sufficiency is the so-called “missing middle,” a situation in which aid volumes have decreased yet total financial resources available to government (through credit and taxation) have not increased fast enough to compensate for the decline.

In response to critiques of traditional aid allocation policies, multilateral organizations engaged in global health, including GAVI, the Global Fund, UNAIDS, UNDP, UNFPA, UNICEF, UNITAID, the World Bank, and the WHO, recently launched an Equitable Access Initiative (EAI) in 2015. The purpose of this initiative is to consider alternatives to GNI as a framework to assess countries’ need for external financial support for health.

There has also been some debate about whether and how to modify the IDA’s PBA system to better support successful transitions to self-sufficiency. Some suggestions include reforming the IDA’s aid allocation formula so that it explicitly includes development outcomes and modifying the allocation formula to take into account vulnerability with indicators such as the United Nations’ Economic Vulnerability Index (EVI), the Brookings Institution’s Index of State Weakness in the Developing World, the Fund for Peace’s Fragile State Index, and the Bertelsmann Stiftung’s Bertelsman Transformation Index. However, in 2016 the IDA concluded that these indices either strongly correlate with GNI per capita or lack sufficient frequency or coverage necessary for use.

These debates both among academics and multilateral aid organizations highlight the controversy around the concept of self-sufficiency and when aid should cease for any recipient country. In concluding the recent review, EPAR identified six major questions that underpin this ongoing debate:

The question of whether there is a causal link between receiving aid and transitioning toward self-sufficiency is difficult to answer with certainty as the counterfactual is unknown, i.e., what would have happened to a country’s trajectory in the absence (or presence) of aid. Further, one key indicator of both self-sufficiency and aid allocation is governments’ reliance on aid, which complicates the task of attributing increases in self-sufficiency to aid flows.

Ultimately the results of EPAR’s review suggest that self-sufficiency is not consistently defined or measured in either the academic literature or donor policies. Further clarity in defining self-sufficiency could allow more consistent empirical analysis of associations between aid and a country’s development trajectory.

Working with Partners to Find Solutions to Integration Challenges

Since 2017, Development Gateway has been working with the Government of Uganda to build and update their Aid Management Platform (AMP). Uganda’s AMP houses over 1,300 on-budget projects directly from its national data management system. This year, DG built a module that interfaces with Uganda’s Program Budgeting System (PBS) to ensure that data is effectively transmitted between the two systems.