No one would disagree with the fact that proactive disclosure of public contracts by public agencies improves service delivery, curbs corruption, and helps monitoring. Laura Bacon says open contracting could be a game changer.

Most public agencies in Nepal have their own e-procurement portals, designed to facilitate bids. You can also find tender information and awarded contracts in these portals. Contract data is present to some extent in these portals, but they are not in an easily-accessible open format. Also, multiple portals means we never get the real picture of all contracts in Nepal. If all contract information from multiple portals were integrated, it would be possible to, for instance, see the total monetary value of contracts being implemented in Dailekh district, or to know which contractor has the most contracts in 2014 in Parsa district. Opening up contract information would give a whole new perspective on the situations of contracts.

The open contracting portal for Nepal has yet to be released. However, below are a series of screenshots to give you a feel of the system. We can see the number of contracts in different districts, along with various indicators like the Poverty Index, which gives insight on how contractual activities are being carried out. 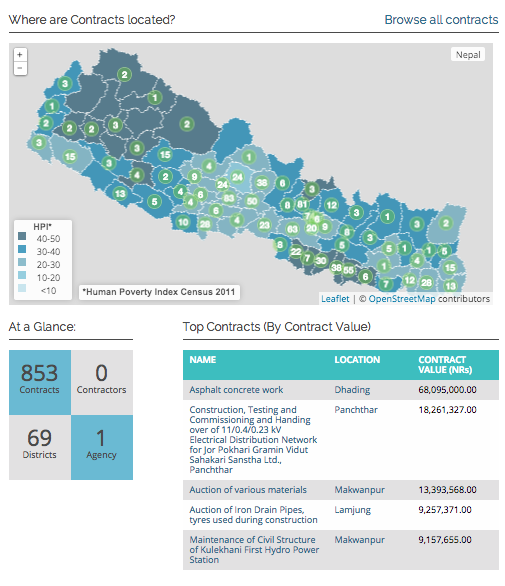 We can also see which categories have the highest contract value, and their distribution year-over-year. 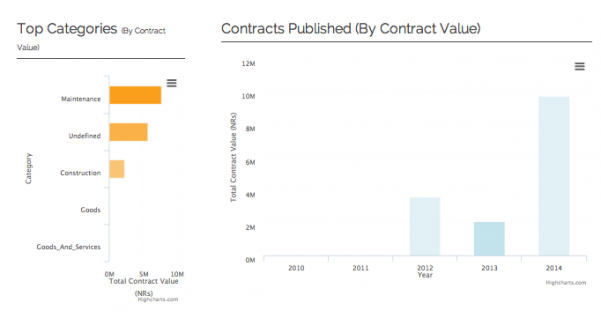 For any given category, we can view how the contracts are disbursed in various districts.

The portal is just a start, and doesn’t provide all of the possible analyses of these contracts. However, the data will be available in open format for those who want to delve into more detail to derive deeper insights. 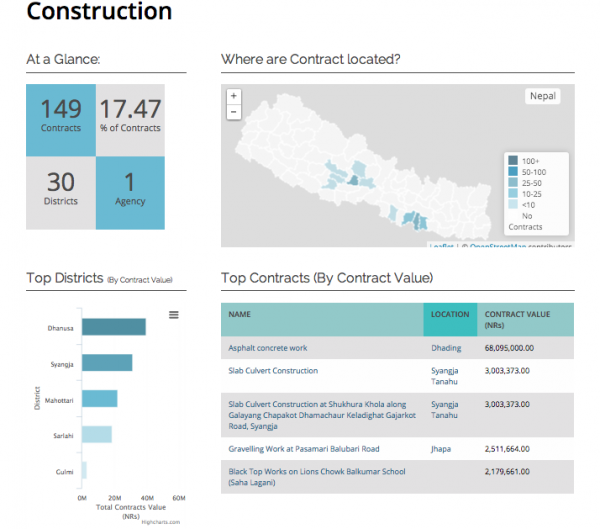 So far, the portal doesn’t include all contracts executed in Nepal. Only three public agency portals — Department of Roads, Nepal Electricity Authority, and Department of Local Infrastructure Development and Agricultural Roads — are included. It will take time to integrate all tenders from these portals as well. But even with such a limited number of agencies and contracts, we can already derive interesting insights. Imagine when we will be able to see the entire picture of active and historical contracts in Nepal? Do you think it could be a game changer? Only time will tell.

The public portal will be released on September 22nd, 2014.

This is a modified version of a post originally published on Open Nepal’s blog, authored by Anjesh Tuladhar