Development Gateway’s Geocoding Suite has several components, each working in tandem with aid and management information systems to assign precise geospatial data on the locations of development projects.We have recently announced the addition of a lightweight, user-friendly automatic geocoding backend tool – aptly called the AutoGeocoder. If you read our last blog post, you’re familiar with some of its highlights, functions, and features. In today’s post, we’ll be diving deeper into the tool’s inner workings – as well as into recent changes we’ve made to the lightweight, open source Open Aid Geocoder tool.

Below, we begin with the AutoGeocoder:

As mentioned in our last post, the AutoGeocoder tool reads through text provided in various document formats (PDF, DOC, TXT) to identify activity locations, and then produces a final list of georeferenced location names. The tool has been fully developed in Python 3, and combines well-known tools and libraries such as NLTK and scikit-learn.

In short, the AutoGeocoder is able to read a text-based document, split it into sentences, classify those sentences using a text classifier, filter classified sentences to include only project implementation-related text, generate a list of named entities from the selected sentences by querying the Stanford NER Server, and finally query the GeoNames API to retrieve the final project location information.

It is composed of three key elements:

The AutoGeocoder can be configured to run in three different modes: 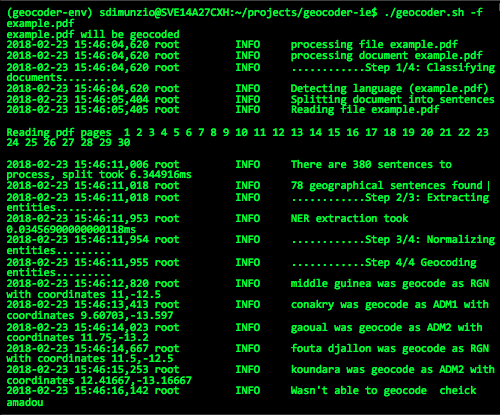 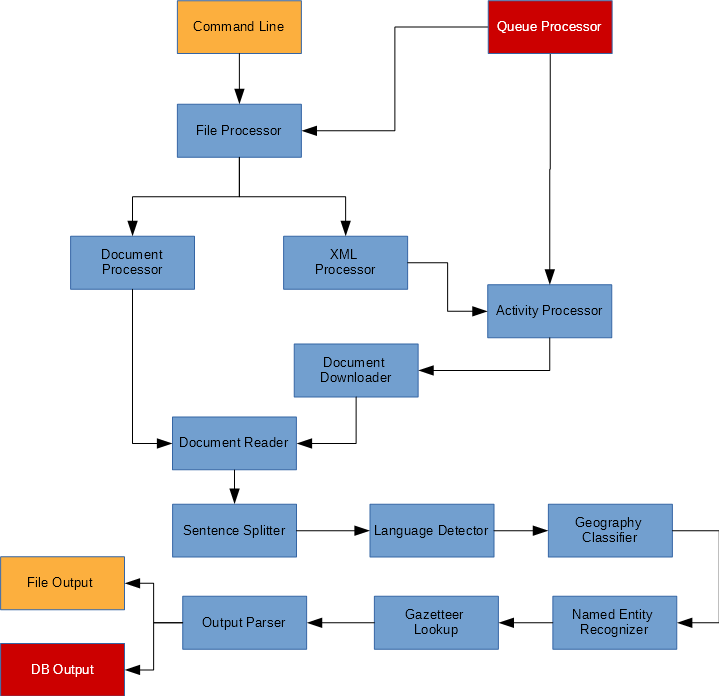 As mentioned, a key piece of the AutoGeocoder is the pre-trained text classifier. Using machine learning, it tells the tool whether a found location is actually the project implementation location or is an irrelevant location (such as the address of the donor’s headquarters). The default classifier has been trained with a small dataset, so it is recommended that users train their own text classifiers to achieve enhanced precision.

The AutoGeocoder provides a set of features useful for this task:

Another recently-updated Geocoding Suite feature is the Open Aid Geocoder. Originally, this tool was designed to be plugged into an existing IMS system, but in keeping pace with user demand, we have created an API and simple database for the interface – allowing it to run as a standalone service. As mentioned in our last post, it now also uses the AutoGeocoder as well as allows for manual searching and adding of location information.

Entirely developed in Java and based on the Spring framework, this RESTful API provides the UI with backend support. The Geocoder API exposes a group of JSON HTTP endpoints, which allows the UI to import new project records, read the current list of projects, read full project information by providing a project identifier, and save edited records. The PostgreSQL database and the PostGIS extension store geographic project information as well as Global Administrative Boundaries (GADM) records. These records allow the UI to render the project’s recipient country administrative boundary layer over the map, and then query administrative names while manually geocoding. We’ve developed the API to provide a default backend to the Open Aid Geocoder, allowing seamless usage of the tool as a standalone web service. For a better look at the Geocoder API, check out the Github repository here.

The Geocoder User Interface (UI) has been built using the latest innovative technologies, such as React and Reflux, mixed with other popular libraries such as Leaflet, i18next and Bootstrap, compiled together using Webpack. As the Geocoder UI is a purely Javascript application, it can be integrated into any existing web-based system.

Originally released last year, the Geocoder UI has undergone a major refactoring to adapt to the recently-developed Geocoder API. We’ve also added new capabilities such as multilingual data entry support, integration with the AutoGeocoder, Import/Export of IATI 2.01 and 2.02 XML files, and a renewed, freshly designed interface. For a better look at the Geocoder UI, see the corresponding github repository here, and take a look at the User Guide here. 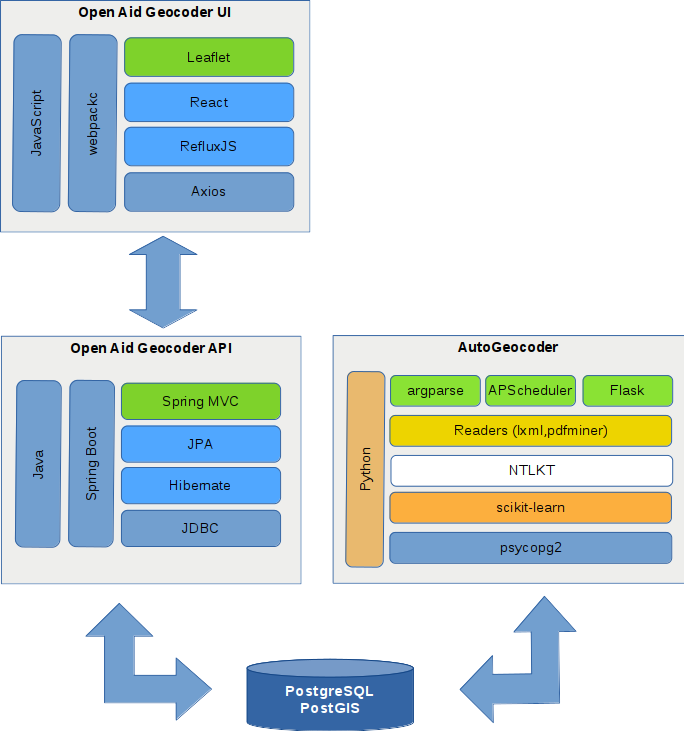 Figure 4: Elements of the AutoGeocoder

In Episode 2 of "Data…for What?!," a podcast series from Development Gateway: an IREX Venture (DG) which explores our new strategic plan, Josh Powell met with experts from DG and IREX to discuss DG’s expansion into the education, media and disinformation, and youth sectors. The conversations explore the most pressing challenges and greatest opportunities for data and technology to positively impact these sectors and discuss how these trends are likely to play out in the years ahead. Based on these trends, the experts explain the unique fit for DG’s skills and specific opportunities for collaboration that align with the vision of DG’s partnership with IREX, which has a long and successful history working in each sector.