In 2005, the international community came together to adopt the Paris Declaration on Aid Effectiveness, built upon the idea that “aid could – and should – be producing better impacts.” Improving effectiveness means aligning development assistance with the needs and priorities of the partner country government, as well as coordinating activities among partners to avoid duplication of effort.

However, given the proliferation of development actors, the increase in subnational decentralization, and the limited ability of partner country governments to manage complex systems, effective targeting and coordination is often easier said than done.

To make powerful targeting and coordination a reality, government aid information management units need not only good data on aid flows, but user-friendly tools enabling them to turn vast information into actionable insights. In 2010, USAID and DG (an AidData Center for Development Policy (ACDP) institutional member) partnered to develop such a tool. Together, the two built an interactive GIS module for the Government of Liberia’s installation of the DG flagship product, the Aid Management Platform (AMP). Utilizing the tool, users could visualize project locations and statistical indicators. For the first time, the GIS module unlocked the ability for each development agency in a country to track their investments on a single map. 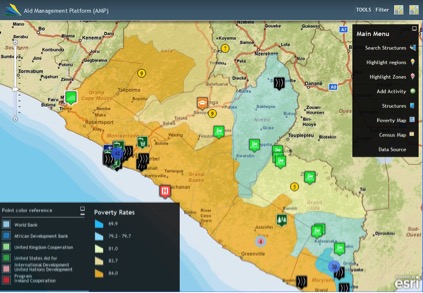 In 2012, ACDP partnered with USAID’s Global Development Lab (GDL) under the Higher Education Solutions Network (HESN) program and began working to transform the Liberia proof of concept to global scale. We worked with the governments of Nepal, Haiti, Senegal, Uganda, and Timor-Leste to geocode aid investments in their AMPs, precisely identifying and mapping each project’s sub national locations. Each government also received the AMP GIS module in order to visualize the geocoded aid information and other geospatial development indicators.

However, as the program matured and our partner countries collected more GIS data, it became apparent that the existing GIS module was insufficient to support the necessary analysis for decision-making. Unmet needs centered around improving performance in low-bandwidth environments as data volume grew, improving user-friendliness of the system design, and acquiring additional features for simple analytical tasks. To continue meeting our partners’ ever-evolving needs, it became essential that we invest in a new, state-of-the-art GIS module.

The new AMP GIS module has been deployed in 8 HESN partner countries through direct USAID investment, and has been scaled up to 16 total countries through external funding. Such strong advancements to the AMP GIS have enabled three primary use cases across the countries:

Increased use of AMP GIS for information sharing is fueled by the tool’s enhanced performance in low-bandwidth environments, as well as its streamlined ability to create, save, and share custom maps. AMP GIS provides a centralized official data source, systematizing all development partner activities and allowing government aid management teams to easily understand key targeting and coordination trends across their country’s aid portfolio. For example, the Ministry of Finance in Nepal includes outputs from its AMP GIS platform in its Development Cooperation Report overview to show changes in municipal distribution of each Development Partner portfolio, and the Honduran Ministry of Finance has done similarly. According to Mr. Keith Muhakanizi, Permanent Secretary of MoFPED Uganda, AMP’s “data visualization and geo-coding functionality […] allows users to quickly analyze vast amounts of information using tools such as charts, graphs, and maps. These images often reveal stories about aid that might otherwise be difficult to observe, such as the relationship between aid activity locations and local poverty indicators.”

AMP GIS is valuable in empowering country governments to set their own agendas when it comes to where and how development partners invest in their countries. The redesigned AMP GIS has been a leading input in the creation of Nepal’s Development Cooperation Policy. By enabling the government to analyze project locations by district with sub-national indicators, AMP GIS can guide the appropriate size and preferred geographic focus of new programs. According to one Haitian government official, “[the AMP GIS module] gives us a better picture of the distribution of aid on the territory. This provides relevant information to ministers [as they] prepare their meetings with donors. In the same way, having donors sharing local data allows us to [motivate] other donors to give us more precise information on the location of their projects.”

At the project level, AMP GIS inputs are used in deciding where to locate a project. The Timor Leste module’s advanced filtering and search functionality is used to identify whether similar projects exist in the same location, one official explaining, “We search for a project in the field. If there are too many in a certain district, we avoid that so that we can re-distribute the resources.” The Government of Uganda has also reported instances when consulting their AMP GIS has led to requesting that a development partner locate a project in another area to avoid duplicative efforts. In the case of the Philippines, the National Economic and Development Authority is updating its review processes for aid- and domestic budget-funded programs to incorporate analysis modeled after its AMP GIS. This new process will ensure that project siting is evidence-based: matching fund allocation to local needs and reducing duplication of efforts.

As we move forward, ACDP continues improving the AMP system through regular iteration in response to evolving needs. In the HESN award’s final year, the ACDP team has implemented a series of upgrades supporting greater uptake of geocoded data by partner country policy-makers and practitioners. This includes integrating foreign aid and domestic expenditure data in the Senegal AMP and developing offline functionality in Niger ensuring that the system is accessible to all users regardless of their internet connection quality. Additionally, starting in Honduras and Haiti, DG and ACDP are conducting AMP outreach and rollout to sub-national governments and local stakeholders to increase AMP’s usefulness for local-level decision-making and planning. In each case, improvements developed in cooperation with partner countries will be rolled out quickly to benefit the entire AMP community.