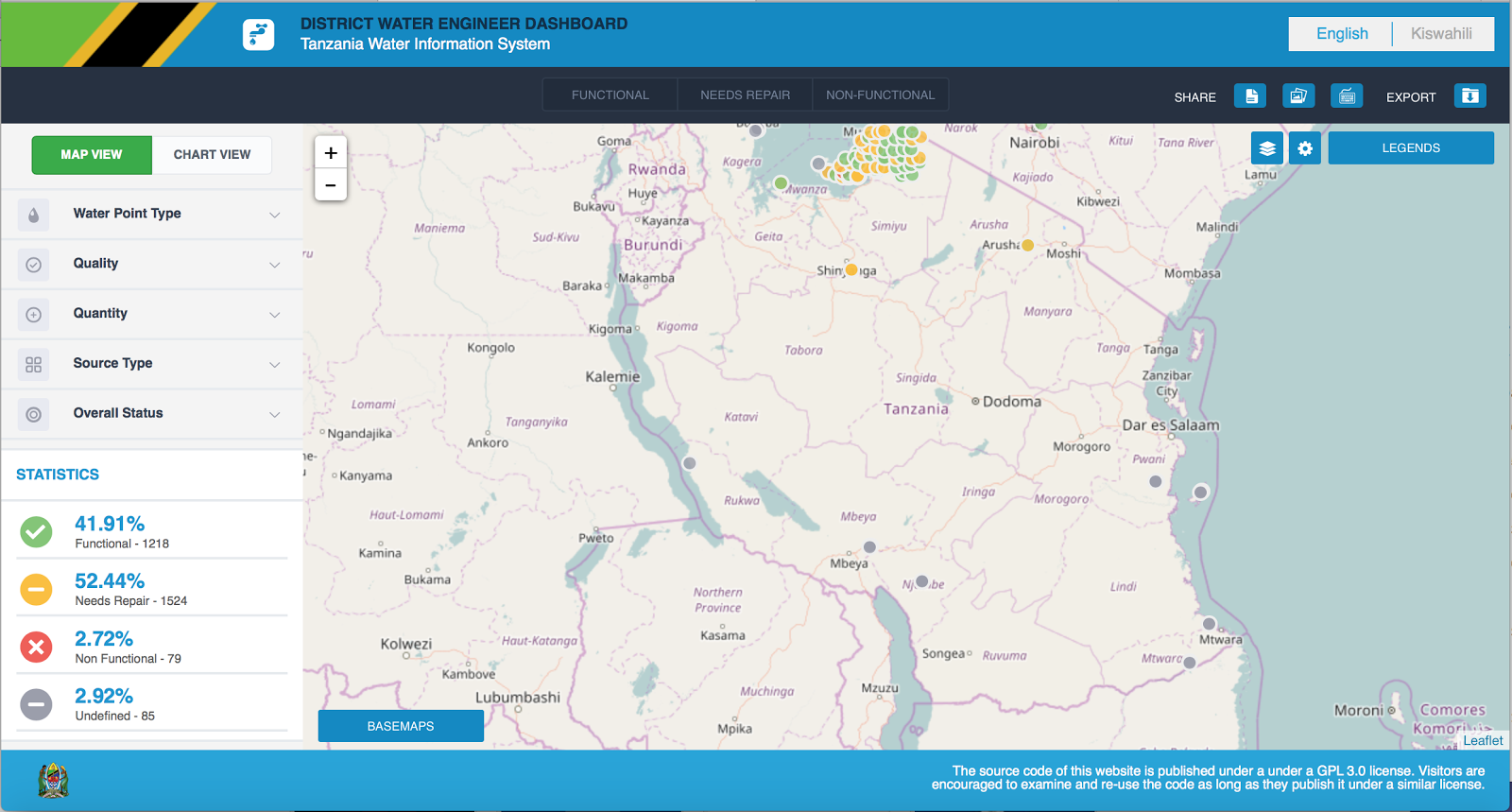 This dashboard allows key audiences – citizens, District Water Engineers (DWEs), other Ministry of Water and Irrigation officials – to easily view the statuses of individual water points. Community reporters can also verify whether government receives their reports. Users further have the ability to filter by water point by type, quality, quantity, and source, either on the map or in bar chart format. 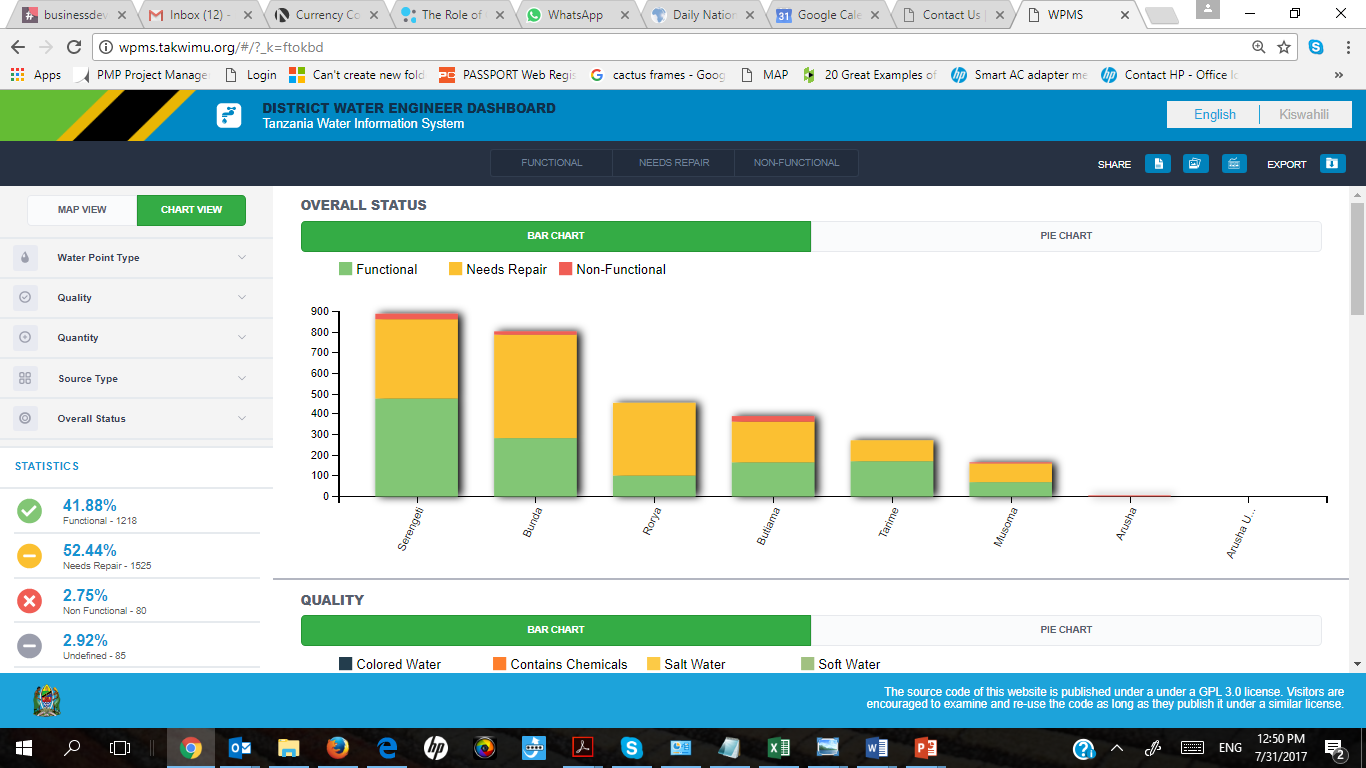 Importantly, the mobile application is accessible also on mobile – not just to create water points (which can also occur without internet connectivity with data synchronization taking place when a connection is next detected) but also view them. This is important for users when they cannot access the desk version. 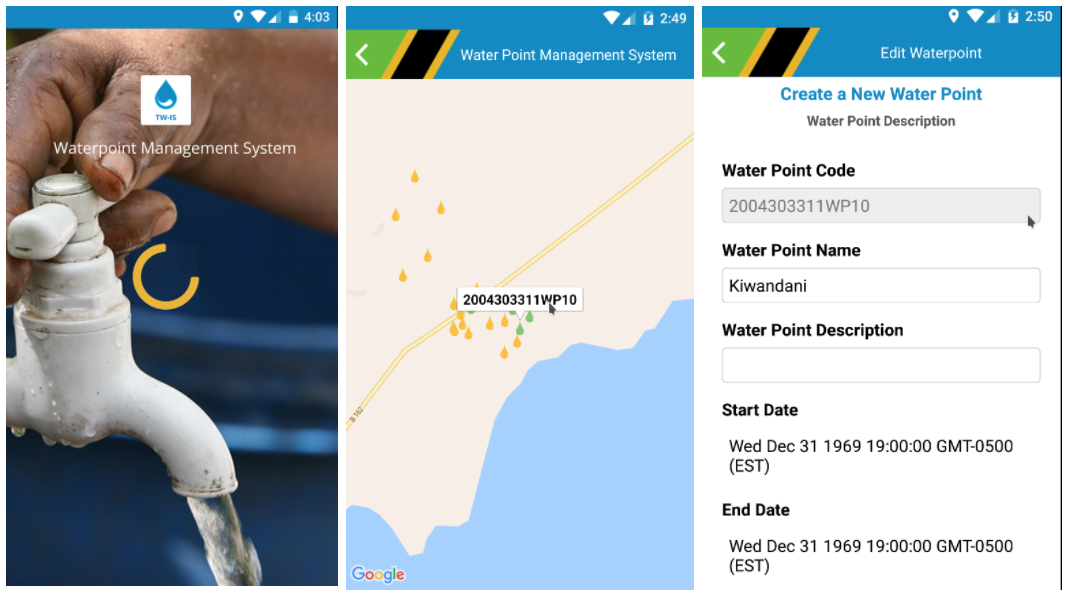 This visualization is included in the dashboard, but has limitations. Namely, it does not take into account distance from a village to the water point, and only considers water point functionality. 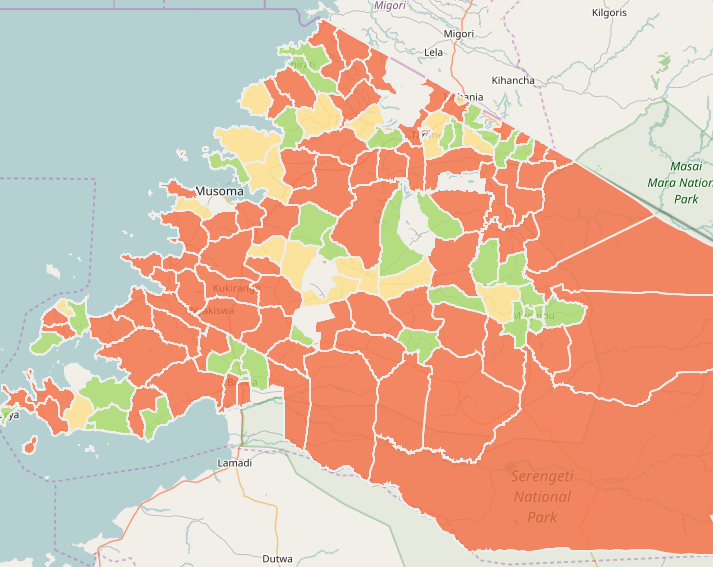 Through SEMA, we proposed an innovation on the water coverage methodology, by incorporating an external population dataset from WorldPop. This dataset provided estimates on how many people live in each square 100 meters around the world, stored in raster format.

Our team imported the WordPop data into the dashboard’s PostGIS database. We then were able to set up calculations to determine how many people each water point serves, based on distance from each point. Dashboard users can toggle the distance, from 400 to 5,000 square meters. 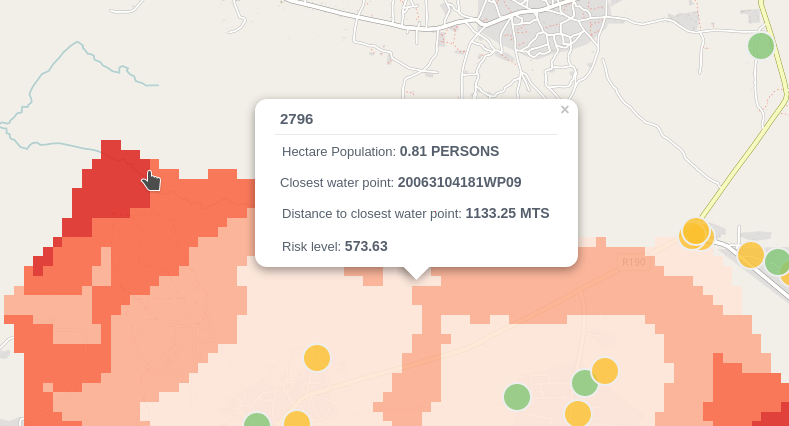 Figure 5: Population served by water point: Higher risk area since there is more population (distance is not the only factor) 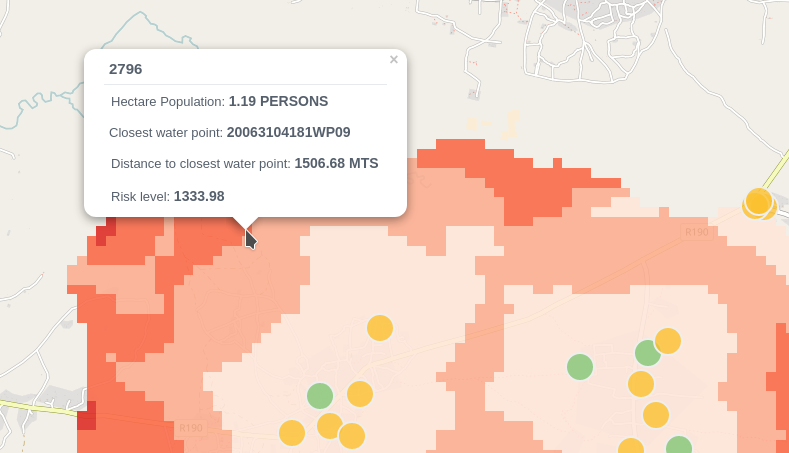 Enabling these distance-based calculations also allowed us to include visualizations of the distance between health facilities and water points – an important planning consideration for the Ministry of Water and Irrigation. 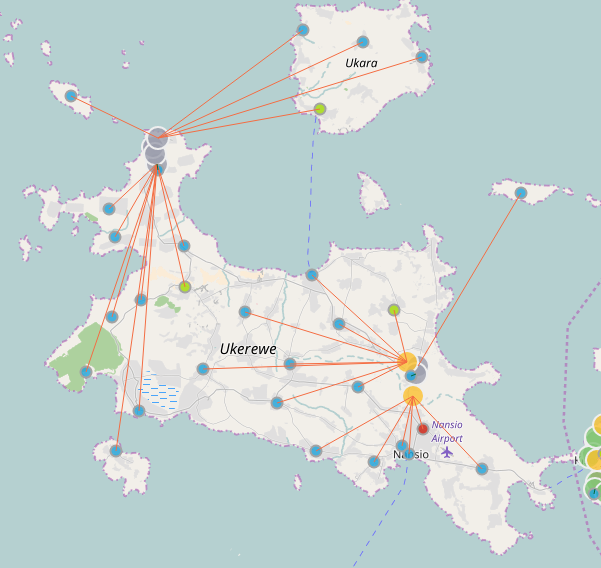 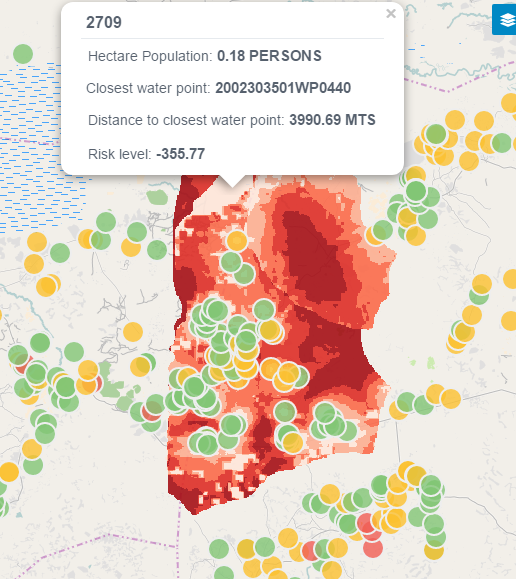 To scale and sustain this work, it’s important to maintain the base technology; continue to adapt and iterate on the programmatic approach; and, finally, to identify resources for strengthening capacity and use of the system.

Fortunately, on the first point, the University of Dar-es-Salaam is an exceptionally well-positioned partner and facilitator for this work. UDSM possesses the skills needed to enhance and maintain the DHIS2 back-end, and open-source solution dashboard and application front-end; they also have deep experience and relationships with the Ministry of Water and Irrigation.

As to the second — it’s tempting to believe that, following a successful pilot, scaling is simply a matter of making the tool available to a wider audience. While the overall SEMA project has shown promising outputs in terms of real-time monitoring, additional government resources are likely to be needed in order to sustain and scale the program. Scaling up in phases, with adjustments/revisions based on feedback from DWEs, will reinforce gains that lead to overall success.

Finally, we anticipate that additional resources will be needed to support training and capacity strengthening for additional DWEs and community reporters. As the system becomes further populated with data, it can become a stronger mechanism for community feedback; and an evidence base for ministry planning and response; and a resource for smarter, needs-based investments in Tanzania’s water sector.

Read posts one and two in the series.

The UK’s Department for International Development (DFID) and Development Gateway (DG) are pleased to release a new report entitled “Decision-Making and Data Use Landscaping: Better Data, Better Decisions - May 2017 to October 2018.” This work examines the role that data plays in supporting key decisions taken by DFID at the strategy, portfolio (sector or country), and programme level. Supported by the Bill & Melinda Gates Foundation through DG’s Results Data Initiative, the report synthesises in-depth interviews with approximately 60 DFID staff across four country offices, all sector teams, and senior management.